So Goswami ji is now paying to Sri Sankar Bhagwan and Maata Parvati. To people new to Indian mythology, but aware of the complex DemiGod relationships, it may seem surprising how the son (Ganesh Ji) is prayed to before his parents. However, philosophically as well as mythologically, we are in right to do so.

It is in order to be able to see and envision the Supreme God, seated deep within one's Atman, that one needs the Shraddha and the Vishwas. It is in order to seek that ultimate blessing, that Goswamiji begs to Shiv-Parvati.

Side Note : Shivaji is the Greatest Knowledgeable Devotee of Shri Rama. Mata Parvati is not just His Divine Consort but also His disciple and hence the ideal personification of reverence, trust, faith and enlightenment. It is only very natural that Goswamiji begs for their blessings as he aspires to narrate His Lord's pastimes.

The very first verse of Goswamiji's Mangalacharan offers his praises in reverence to Goddess Saraswati and Lord Ganesh.

Saraswati is not just the Goddess of wisdom, but also the Goddess of Speech. Speech is not just about some sounds being uttered, but it's about the pronunciation emanating from the 'Varna' or the sound; it is also about the meaning /s and their connotations; the feelings these words invoke; the poetry that gets created in the process and the beauty, the exalted bliss and the auspiciousness of every spoken or written word and every thought.

It is very intriguing to note that while Saraswati is the Goddess of wisdom and intelligence, She is rarely worshiped alone. Almost as a rule, She is worshiped with Lord Ganesh.

In fact there are instances in epic scriptures where the Gods and Goddesses have prayed to Saraswati to manipulate a certain human, demon or another God. While in the longer run, it always serves a larger purpose; the fact remains that it is possible to drift away from a wise choice despite intelligence.

However, Lord Ganesh is different. He is the epitome of goodness, auspiciousness and everything that is ‘Shubh’. He also happens to be the God blessed by all Demigods alike to be the first among peers. He is the first one to be worshiped in all auspicious rituals and activities.

Despite this – Sri Tulasi Das addresses Goddess Saraswati before Lord Ganesh. Or is it that the acharya is addressing both of them equally in the single phrase ‘VaniVinayakau’?

As a poet, his obvious leaning would be to the Goddess of Speech, but as a devotee he realizes that it is possible to lose humility, or focus or the clarity of thought to intelligence and so he invokes Saraswati with Ganesh in the same phrase; to ensure that his poetic Endeavor remains auspicious.

This verse indicates the importance of realizing the difference between intelligence and wisdom. Intelligence is obtained by learning and applying it, but wisdom will always need what we call 'Vivek' loosely meaning ethics. It is only when combined with the right ethics and morality that knowledge can become wisdom and lead to auspiciousness.

Unlike the common western traditions, almost all Hindu sects that follow the Theistic tradition of thought where the Supreme Personality of the Godhead is different from us Humans, the teachers always begin with a Mangalacharan.
Mangal means aupicious and Acharan loosely means behavior. So, culturally, we are driven towards auspicious behavior. Before starting any activity, be it writing a book, or giving a talk, doing the regular – deity worship, or any other puja or ritual, Mangalacharan is something that Acharyas ensure.

It is interesting to see that while the concept of ‘Mangal’ does not leave one with a lot of options for synonyms. It is a feeling that’s combined with blessing, exaltation, good, boon and so much more all combined.

It is also interesting to note that Goswamiji will repeatedly bring up the motif of Mangal through out the text. Auspicious is what auspicious does – which is Sri Goswami Maharaj’s Mangal Bhawan or Sri Ramchandra and Devi Sita.

On this note, Mangalacharan is carried out immediately after the invocations and hence Gowamiji pleads some of the most prominent deities to bless him in his endeavour to narrate his Lord’s mahakatha.

In this age of Kali, there’s only one way to Salvation. It is to chant the Holy name of the Sri Hari. It is with this deep conviction that I have humbly taken up, this very ambitious project. In fact, even to say that this is a project or it is ambitious is indicative of the fallen state we humans are.

In this series of posts on this blog, I will attempt to share my thoughts, ideas, understanding and the love for the scripture I have always been the most close to. I’ve been raised on Sri Ram Charit Manas and I’ve been raised on it musically, spiritually, intellectually as well as emotionally and for years I have craved to write about how I feel when it comes to Sri Ram Charit Manas or how it has deeply affected my life.

Nothing I will write is new. In fact all of it will not even be a speck in the ocean of knowledge that our Acharyas have shared with us. However, through this project, I only hope to purify myself more, to cleanse my inner self, to crystallize my own understanding and to make sense of this journey that I claim to call life. 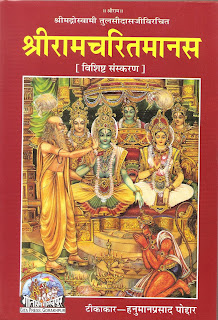 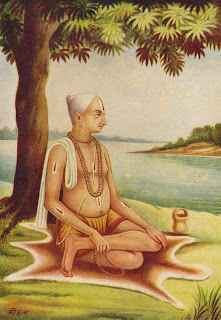 Since I have yet not received the blessing of a formal initiation in any sect or Sampradaya (perhaps I am too fallen for that), I offer this attempt to Sri Hari, Mata Janaki, their devotees, Goswami Tulsidas Maharaj (for blessing us all with this jewel),and to my parents who blessed me with this divine gift.